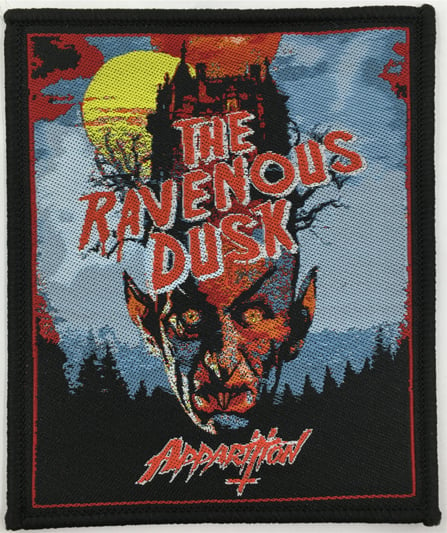 This is the special edition that comes with a woven patch of the cover art.
Limited to 80 copies!

‘The Ravenous Dusk’ is the debut album from the entity known as Apparition. Eleven tracks of original motion picture soundtrack inspired by classic horror and their iconic scores. A chilling tale of the undead conjuring the pioneering progressive rock styling of Goblin with inspiration from ‘Phenomenon’, ‘Profondo Rosso’ and ‘Tenebre’ as well as the work of legendary film composers such as Bruno Nicolai and Vengelis as they plunge headlong into the future melding ample amounts of 80s Electro fright nights reminiscent of John Carpenter and his eerie retro wave predecessors like Survive.

"Legend spoke of an unspeakable horror in the mountain ruins. Villagers would tell tales to scare the children. But what if the stories were true?
Grave robbers lured by tales of priceless treasure hidden deep within the mountains will get more than they bargained for when they unearth an antiquated crypt. For this is the grave of Arkhan and his thirst is unquenchable!
Once a dreaded warlord of the Eastern lands it was said that his deeds were so evil that the devil granted him immortality. He scourged the land for generations with blood and fire like an unstoppable pestilence until he was eternally condemned to his tomb by a man known only as The Priest; more a man of the sword than a man of the cloth.
Now awoken from a deep slumber of centuries Arkhan takes flight into a new world. Enraged by diabolical bloodlust, any man woman or child in his path will feel the savage fury of his fangs. And in death as in life his cruelty knows no bounds; his savagery no limits.
But Arkhan pines for his lost love, the beautiful Ludmila and is haunted by distant memories of her tomb. He seeks revenge on the descendants of those who stole her from him and makes a vow of vengeance to gorge on the blood of his enemies but The Priest is waiting for him. For the spell which bound Arkhan to the grave would also resurrect The Preiest from the Grave should it even be broken. It is now a battle between good and evil; two undead souls locked together in an eternal covenant.
Will the Priest vanquish Arkhan or will Arkhan send The Priest straight to Hell? Will Ludmilla rise from Her Tomb and can the heart of evil be broken? Or will the world be bathed in blood forever as the final battle shrouds the world in a RAVENOUS DUSK!"